This week I wanted to showcase something cute. Compared to the previous weeks’ items, this one is more of a novelty toy. Decades ago, my grandpa went on a trip to Japan. During his trip, he picked up a miniature daisho letter opener set. These letter openers resemble a katana (the longer sword) and wakizashi (the shorter sword).

Both swords can be used to open letters. The blades aren’t sharp enough to cut you, but they can smoothly run through the edge of an envelope.

These swords are commonly sold as toys or as a novelty office conversation starter. If you search phrases such as “katana letter opener”, “miniature katana”, “toy katana”, you’d see website listings for these swords. I’ve also read that these swords are a popular gift for Japan’s Children’s Day holiday!

These swords are commonly sold as a single sword, others (like this set) has both the katana and wakizashi on a stand. I’ve also seen a set of three swords!

So how do you display them properly?

According to Paul Chen Hanwei, from Paul Chen Hanwei Swords, typically in times of peace, a katana would be sheathed. The blade is also stored pointing up with the handle on the left. An interesting tidbit he mentioned is that the katana is typically held in the samurai’s right hand. In times of war, the handle would be displayed on the right side which makes it easier to grab. So, if a handle points right, it symbolizes hostility. When it points left, it symbolizes peace. The wakizashi would then be mounted underneath the katana in the same fashion.

So if you want a passive-aggressive way to subtly show your coworkers that you dislike them, point the handles to the right. Not this image though! I don’t hold any hostility toward you guys!

How you display your swords can symbolize different things, but many times, a sword could be displayed unsheathed for aesthetic purposes. The sheath would be stored underneath the blade, rather than a wakizashi. Also, other hobbyists prefer to display their larger swords underneath the smaller swords. According to Samurai University, the smaller sword (tanto) would be displayed on the top shelf because that is the sword that is removed first when they are placed on the stand. The larger sword (daito) is then placed on the bottom shelf.

So it appears that there is an agreement on handle symbolism, but displaying swords depend on how you were taught.

This is honestly such a cute letter opener. If you ever have the opportunity to buy one of these, I highly recommend it! You don’t have to display it in your office, it’ll look nice on a bookshelf, fireplace, display cabinet, by your TV… The list goes on! Just remember to dust it once in a while. It looks the best when the metal is shiny and polished! 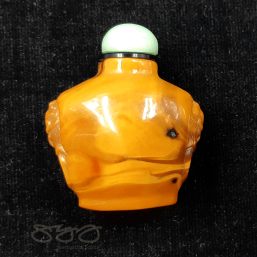 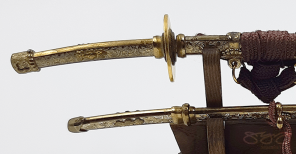 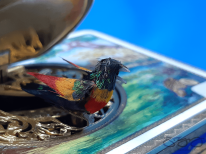 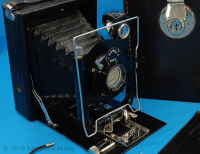